Dear visitors to this online portal,

On 11 April 1945, US Army units advanced on Weimar and Nordhausen. For 21,000 people in the Buchenwald concentration camp, this was a day of liberation; around 500 prisoners were liberated by American soldiers in Mittelbau-Dora. But for tens of thousands of others, the suffering continued – they had previously been forced onto clearance transports and death marches, and many of the survivors were not liberated until weeks later. But since 1945, they have also observed April 11th as the symbolic day of liberation.

We will mark this day for the 76th time in 2021. The significant 75th anniversary of the liberation had to be cancelled at short notice last year due to the coronavirus pandemic. The hope that we could make up for it in 2021 proved to be deceptive, since the pandemic has once again prevented in-person events. But unlike in 2020, we had time this year to prepare an extensive digital programme. This portal brings together the #otd1945 blog about daily events leading up to the liberation, interviews with survivors, statements from politicians, scholars, creative artists and activists, descriptions of the wide-ranging and weeks-long selection of events taking place in Nordhausen and Weimar (and naturally online), and in-depth information about exhibitions and art projects we developed specially for the 76th anniversary of the liberation.

This extensive programme commemorates the days and weeks in April 1945 when the war in Europe was coming to an end, the survivors were liberated from the camps and the Nazi regime was defeated. With this programme, we want to honour the victims and provoke reflection – such as on what has become of the hopes of the survivors of 1945 for the creation of a peaceful, humane, unified and democratic world without racism and antisemitism.

Digital commemoration cannot take the place of personal encounters with and between survivors and their families, but it can make this diverse content and information accessible to a wider audience for a longer period of time. We hope you take full advantage of this portal, and we are delighted to have you here!

On behalf of all my colleagues

Director of the Buchenwald and Mittelbau-Dora Memorials Foundation

Why Am I Here? A Child‘s journey through the Holocaust 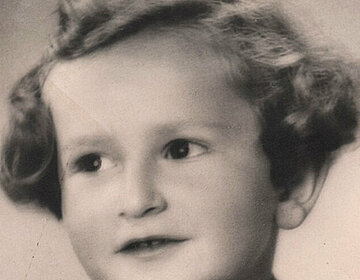